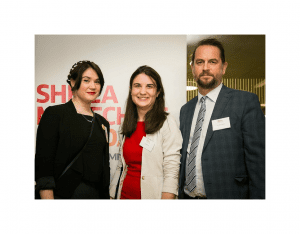 “I’m really pleased to have the opportunity to present this award tonight. Sheila McKechnie was someone who I admired for a number of years, before I started to working at Shelter whilst she was their Director.I was drawn to Shelter because it was a Campaign – the National Campaign for Homeless people – Not just a charity. I wanted to be part of gaining justice and righting wrongs. And SMK was for me the embodiment of this with her passion and commitment to counter homelessness.

In the 1990s – generally charities did not campaign – they didn’t think they were allowed to or that donors would approve. Thankfully, for me and The Right Ethos – this changed and in the new millennium the SMK Foundation and The Right Ethos was formed and we’ve grown up alongside each other over the last decade.

The Economic Justice Award  is a very appropriate award for The Right Ethos to sponsor. Since 2007, we have been supporting organisations to find the best possible campaigns and communications staff for their organisation. And helping these candidates to develop their career and find a workplace that suits their ethos and values.

The Economic Justice Award recognises campaigners that have brought about lasting positive change relating in the workplace e.g. tackling exploitation and discrimination in the workplace, and improving workers’ rights and benefits.

Runners up of this Award are:

– Heather Kennedy and the Fair Funerals campaign which aims to seek an end to the underlying causes of funeral poverty.

– Danielle Tiplady for the Bursary or Bust campaign who has campaigned to protect the bursary funding available for nursing and midwifery students.

This is a joint Award and the winners are Lisa Nathan and Sarah Corbett, who have both campaigned for the uptake of the Living Wage.

–  Sarah Corbett and the Craftivist Collective joined forces with ShareAction to call on Marks and Spencer’s to pay the Living Wage. After coordinating a series of ‘stitch-ins’ at branches of Marks & Spencer across the UK, the company announced its plan to increase staff pay to £8.50 per hour in UK stores and £9.65 per hour in greater London from April 2017

So, I’m delighted to present this award to Lisa Nathan and Sarah Corbett.”

Find out more about all the winners at the SMK Awards 2017.